The story of Chino goes all the way back to the dawn of Japanese civilization, over 10,000 years ago. In those bountiful and peaceful times following the ice age that we call the Jomon period, many people gathered at the foothills of the Yatsugatake Mountains, where they created one of the biggest communities of the time. 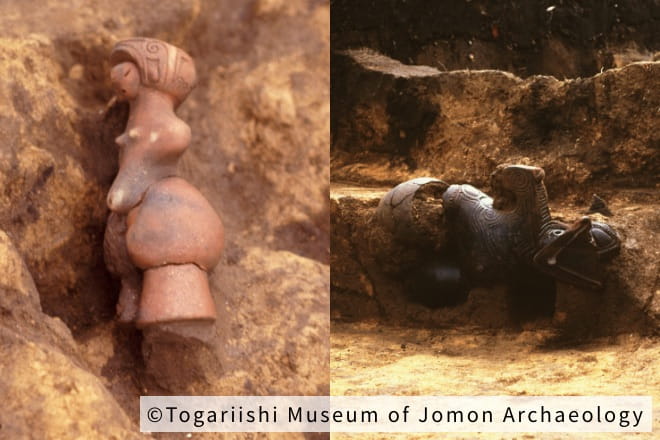 The Suwa area, which contains Chino, also makes an appearance in the first Japanese written text, the “Kojiki.” This ancient book that contains the entire mythology of the Japanese kingdom was written in the 7th century AC but tells of even older legends set about two thousand years ago. It recounts how the deity Takeminakata fled Izumo after he lost a fight with Susanoo and then chose the land of Suwa as his new abode, where he was later enshrined at the sanctuary of Suwa Taisha. 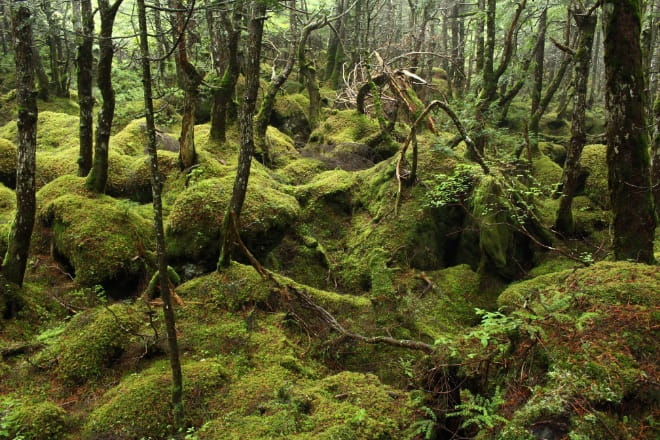 Suwa Taisha does not only appear in legends, but also in history. Many famous warriors and lords such as Tokugawa Ieyasu and Takeda Shingen kept an epistolary correspondence with the sanctuary. The letters which are now held at Jinchokan Moriya Historical Museum often sought the blessing of Takeminakata, god of Victory, before a battle.
Takeda Shingen, the lord of Kai Province (current Yamanashi Prefecture), in particular, left his mark in the region. Stretches of the “bo-michi,” a strategic military road he built to take his army through Nagano, remains to this day; and the secret thermal baths where he and his warriors healed their wounds after a fight have now become a renowned onsen retreat. 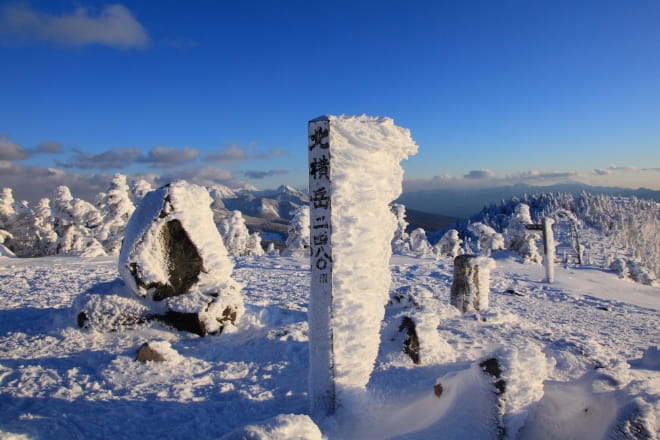 The onsen baths discovered by Takeda Shingen played a significant role in local history. In the Meiji period, almost 400 years after the lord's death, hundreds of people embarked on “pilgrimages” to the hot springs which were considered effective in curing many diseases. 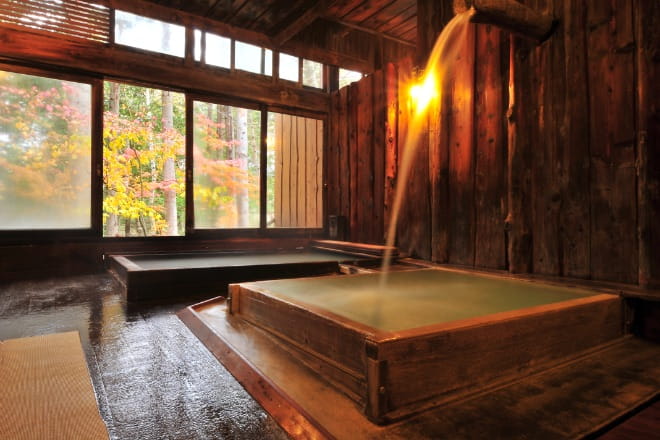 In the 80s, during Japan’s economic boom, the area developed into a popular mountain resort, where people came in summer to trek and in winter to ski. Nowadays, Chino is an eclectic tourist destination where you can explore ancient history, soak in hot springs, trek in the mountains, or simply enjoy nature. 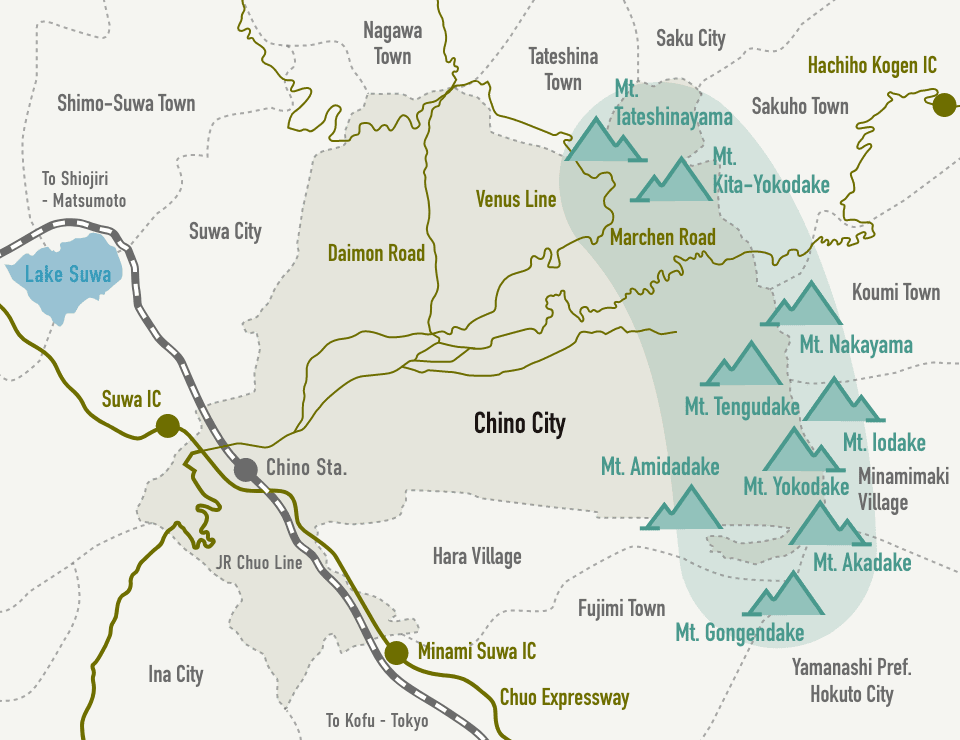 Chino is located toward the center of Nagano Prefecture, on the eastern side. The city is perched in the western foothills of the Yatsugatake Mountains and stretches down all the way to Suwa Valley. Nearby locations include Suwa City to the west, Fujimi Town and Hara Village to the south, and the Saku area to the east and north-east.

The Suwa area was house to one of the biggest communities of the Jomon period. Here, people led a serene lifestyle that allowed them to pursue a high level of artistry in their crafts. The over 2000 exquisite relics that were excavated at the foot of the Yatsugatake all but confirm that. The most impressive examples of local Jomon art, though, are the statuettes of the “Jomon Venus” and the “Masked Goddess,” both designated as National Treasures. These two artifacts, which date back to 4,000-3,000 BC, are voluptuous, graceful, and executed with great attention to details. They are also quite massive, each of them exceeding 2kg of weight.
There are many theories as to why the Jomon people chose to gather at the Yatsugatake. The most convincing one points to an abundance of natural resources. The mountain offered them plenty of water, nutritious food such as nuts and wild game, and high-quality obsidian.

Suwa Taisha, one of Japan’s oldest sanctuaries, is made up of four complexes, the two upper shrines of Maemiya and Honmiya on the southern side of Lake Suwa, and the two lower shrines of Akimiya and Harumiya on the northern side.
The god enshrined at Suwa Taisha is Takeminakata-no-kami, the deity of Victory. However, another “god” has been worshipped in Suwa long before the time of Takeminakata, the Spirit of Nature “Mishaguchi.” Acting as an intermediary between humankind and Mishaguchi was the Moriya, a family of shamans enveloped in an aura of divinity. After losing a battle with Takeminakata, the Moriya family started serving the newly arrived deity and was invested with the rank of “Jinchokan,” high priest who performed sacred rituals involving both gods, old and new.
The coexistence of primeval nature worship and Shinto worship makes Suwa Taisha a one-of-a-kind shrine in Japan.
The site of the hall of worship, in all Suwa Taisha shrines, is marked by four gigantic pillars. These are erected once every 7 years during the ancient festival of Onbashira when the locals drag big trees down the Yatsugatake Mountains by manpower alone and ride them in a ritual performance where many put their lives on the line.

Several onsens in Chino have an intriguing backstory. There is the hot spring whose location was revealed to the high priest of Suwa Taisha in a revelatory dream, and then, there are Takeda Shingen’s secret baths where the lord’s samurai healed their wounds after a battle.
During the Meiji period, about 150 years ago, local hot springs became a pilgrimage destination for people afflicted by various health conditions who sought the baths for their curative properties.
The reason why the onsen baths in the Yatsugatake have long been used for therapeutic purposes lies in their volcanic origins. There are over eight types of springs in the area, from ferruginous to acidic and carbonated springs, and all are rich in minerals.

The Yatsugatake Mountains, a long-extinct volcano with dozens of peaks (the highest of which reaches a height of 2,899m), sits astride two prefectures, Yamanashi and Nagano, stretching 25km from north to south and 15km from east to west. Its massive body and large foothills rival those of Mt. Fuji, and over half of their western side belongs to the Chino area.
Each peak that makes up this vast mountain range is special in its own way. Just for citing a few, on the southern side, there is Mt. Akadake, a considerably tall peak just shy of 3,000m, and Mt. Gogendake, a site of mountain asceticism since old. On the northern side, Mt. Tateshinayama shows off a graceful silhouette that earned it the name “Fuji of Suwa,” and Mt. Shimagareyama displays a rare fir wave phenomenon that draws a pattern of alternating green and white bands on its crest.
Many mountains mean many trails. Those in the Yatsugatake can suit the need of every trekker, from the occasional hiker to the most expert mountaineer. There are also several trailheads, many of which can be reached through public transportation.

Yamaura means “in the mountain’s shadow.” It describes the unique environment of the rural villages in Chino located under the peaks of the Yatsugatake Mountains, at an elevation of 1,000~1,200m.
The Yamaura is a nostalgic rural region where you can still find century-old farmhouses, beautifully decorated warehouses, and pastoral sceneries untouched by urbanization. It is not a tourist attraction, but a cluster of real villages brimming with life. Whether you spend the night at a farmhouse, or simply take a walk around, the area is worth a visit.

Like their Jomon ancestors, the locals lead a life in harmony with nature. In spring, they forage wild vegetables in the satoyama. In summer, they gather the cool waters of mountain streams into ancient waterways to grow rice and vegetables. In autumn, they pick mushrooms and nuts at the base of the mountains and pickle food to preserve until the next green season. In winter, they make use of the cold mountain breeze to produce unique food called “shimi bunka.”
Typical recipes passed down generation from generation are simple and tasty. Some of the most representative local specialties are tenyose - colorful jelly-like cakes made with agar, abura-e mochi- rustic mochi dipped in a thick and fragrant perilla paste, and soba- Japanese buckwheat.

We believe there is more to travel than just sightseeing.
This is why our mission at Chino Tabi is to design special journeys where, instead of hastily passing by a location, you have the chance to immerse yourself into local life.
Chino Tabi is a DMO -Destination Management Organization- for Chino City and surroundings. Our original activities and tailor-made tours connect you, the travelers, with the locals.
For 10,000 years, the people of Chino have lived under the shadow of the Yatsugatake Mountains, in harmony with nature and attuned to all the seasons, even the coldest winters.
Our objective is to still be “one with the Mountains” 100 years from now.
If you join one of our adventures, you can cook with the village grannies and prepare unique dishes such as rustic mochi with perilla sauce or elegant colorful agar cakes, or observe up-close the technique of a smith and make your own Japanese knife.